New research has shown that horses are able to read and remember the emotional expressions of humans.

The researchers monitored the horses for particular behaviors, such as looking behavior, to assess their emotional states.  What can looking behavior tell you? Horses, and a number of other species, including dogs, tend to process potentially threatening stimuli in the right hemisphere of the brain. This is indicated by a left-gaze bias, because visual information from the left eye is processed in the right hemisphere. Conversely, more ‘pro-social’ stimuli is processed in the left-hemisphere, which leads to a right-gaze bias.

The horses’ stress behavior and heart rate were also monitored, as was their approach and avoidance behavior. 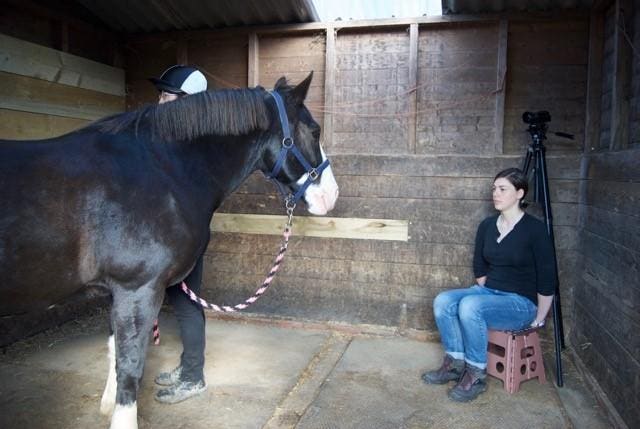 Universities of Sussex and Portsmouth

Person in a neutral state

The study showed that even brief exposure to a pronounced facial expression affected the way the horse later responded to that specific individual. The horses reacted more negatively to the person when they had previously seen the angry photograph, and responded more positively, and less stressed, when they had previously seen the happy photograph.

“What we’ve found is that horses can not only read human facial expressions but they can also remember a person’s previous emotional state when they meet them later that day, and crucially, that they adapt their behavior accordingly,” says Professor Karen McComb from University of Sussex. “Essentially horses have a memory for emotion.”

“We know that horses are socially intelligent animals,” says Dr Leanne Proops of the University of Portsmouth. “But this is the first time any mammal has been shown to have this particular ability.”

“What’s very striking is that this happened after just briefly viewing a photograph of the person with a particular emotional expression – they did not have a strongly positive or negative experience with the person.”

The findings, now published in the journal Current Biology, show how non-primate mammals are able to hone in on emotional state cues of humans and then use the memory of this to guide future interactions.

Do you want to get the word out about your next event? Advertise to our over 30,000 Facebook fans! Our monthly average reach is 425,000 + horse enthusiasts world wide! Check out our advertising rates and give us a call today for an advertising package that works for your budget.

Hesperus woman charged with more than 100 counts of animal cruelty

BARN HACK – Keep Calm and Keep the Flies Away https://www.onlineequine.com/barn-hack-keep-calm-and-keep-the-flies-away/